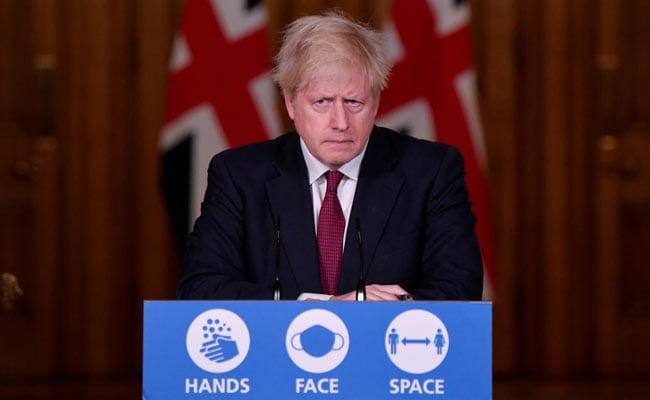 British Prime Minister Boris Johnson on Monday sought to sound a note of calm saying he was working “as fast as possible” to unblock trade across the Channel after France shut its borders to UK hauliers in a bid to contain a new variant of the coronavirus.

Following conversations with French President Emmanuel Macron over the ban, which has caused chaos around the key UK port of Dover and led to concerns of food shortages just days before Christmas, Johnson said supply chains remained “strong and robust”.

“These delays only apply to a very small percentage of food entering the UK,” the prime minister told a press conference, adding that he wanted to sort out the problem “in the next few hours”.

France’s snap decision on Sunday, which was initially set to last for 48 hours, was made in a bid to contain the new strain of the virus, discovered in the UK, which officials have said is 70 percent more transmissible.

The ban caused Britain to bring forward “Operation Stack”, the contingency plan drawn up to deal with anticipated freight tailbacks on roads around Dover in the event of a no-deal Brexit.

Earlier in the day, the prime minister called a meeting of the Cobra emergency committee to discuss the situation regarding international travel and in particular the regular flow of freight.

Misery was piled on travellers trying to leave Britain as around 30 nations introduced bans on individuals arriving from the UK in a bid to contain the new coronavirus variant of the disease which British officials have said is 70 percent more transmissible than the main strain.

The chaos on the roads surrounding the key port is a stark sign of what to expect should Britain leave the EU without a deal in 10 days.

However, Johnson said that during his call with Macron the pair had “vowed” not to discuss Brexit as negotiations between London and Brussels continue.

Road signs near the Channel port, through which 10,000 heavy goods vehicles pass each day, on Monday urged people to go home, saying that the French border was closed.

David King, a lorry driver from Birmingham in the west of England, had been left stranded in Dover trying to make a delivery to Belgium.

“It’s been a frustrating year hasn’t it, for everyone, so this just adds to it. A bad end to a bad year really,” he told AFP.

“We hope to make it home for Christmas. We’ll just sit tight and await decisions that are made out of our hands today,” he added.

A disused airfield will be opened later Monday to serve as a lorry park for up to 4,000 stranded drivers.

UK supermarket Sainsbury’s warned that prolonged disruption could lead to “gaps over the coming days” in the supply of lettuce, cauliflowers, broccoli and citrus fruit.

The ban on all but unaccompanied freight crossing to France comes as companies scramble to shift merchandise with days to go until Britain finally quits EU trade structures.

Those hoping for a deal warned the current chaotic scenes could become a familiar sight without a breakthrough before the New Year deadline, leading to the imposition of new tariffs.

But Brexit supporters accused France of exploiting the crisis to try and force trade concessions.

“Restricting freight movements, however, as the French government is about to do, appears political,” it added.

France and Britain are locked in heated debate about fishing rights post-Brexit, the key sticking point in negotiations.

London mayor Sadiq Khan and Scottish First Minister Nicola Sturgeon were among leading politicians on Monday calling for an extension to Brexit talks to avoid disruption over New Year.

Germany, Russia, Canada, Italy, Chile and Argentina are among other countries to announce flight bans to and from the country.

In response to the restrictions, Britain’s postal service has temporarily suspended deliveries of packages and letters to Europe with the exception of the Republic of Ireland.

“We’re closely monitoring the situation and are ready to open our services as soon as we are able to once the restrictions have been lifted,” the Royal Mail said in a statement.

It said it had also suspended service to Canada and Turkey because of “severely limited” air capacity.

Britain had looked to have turned the corner in its attempt to quell the virus, with the rollout of a vaccine and falling infection rates.

But the emergence of the new strain has thrown the government’s plans into disarray, just as it reaches the crunch finale of talks with the EU.

The government had initially announced an easing of restrictions to allow families to meet over Christmas, but changed its plans after it was presented last week with a dire analysis of the new strain that is running rampant across southeast England.

The UK government’s chief scientific adviser Patrick Vallance said at the Monday press conference that transmission of the new variant of Covid had “clearly substantially increased”.

However, he added that the vaccine against coronavirus should be effective against it and the disease otherwise “looks the same as any other form of Covid infection”.

Britain has been badly hit by the pandemic, with more than 67,000 deaths of those testing positive for the virus.

CINEMATOGRAPHER Halyna Hutchins was shot dead by Alec Baldwin in a tragic accident on a movie set. The gun fired by actor…

EastEnders spoilers: Linda horrified as Max confronts Mick about their affair – and he does NOTHING

RETRO gadgets including Nintendo 64s and Walkmans could be worth thousands of pounds. Classic tech products are…